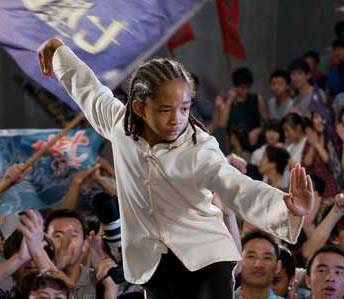 The Kung-Fu Kid is a child or teenager with a very high level of skill in martial arts, whose skills are particularly noteworthy in the context of the story. Sometimes the skills are first acquired during the course of the story, and sometimes the character begins the story already having a significant level of martial arts talent. If it is a Sports Story, the Kung-Fu Kid will likely be working toward a major tournament. In a Fighting Series, this guy will regularly battle against enemies, often in tournaments, but sometimes in deadly serious combat. In Spy Fiction, the Teen Superspy is often one of these. In Fantasy or Superhero stories, a character's martial arts skills might be sufficient to qualify them as a Badass Normal that can stand toe to toe against more supernatural enemies. Some characters may have martial arts skills that could be classified as Supernatural Martial Arts, or even as a Charles Atlas Superpower. Sometimes the kid combines spell casting with martial arts to be a Kung-Fu Wizard.

No Real Life examples unless this kid is considered particularly exceptional and famous in the martial arts world. This should not turn into a listing of everyone with a black belt. Nor should it list every young character that takes a karate class but only has the fact mentioned in one or two episodes and gets into perhaps one fight against an untrained person using a minor example of martial arts skills. Mark Taylor of Home Improvement would not qualify, for example.

This is the martial arts equivalent to the Child Mage or the Kid Detective. Compare to Kid Samurai, Ninja Brat, Cute Bruiser, and Waif-Fu. This character might also be a Kid Sidekick or a Kid Hero. If female, she may be a Little Miss Badass.

Not to be confused with The Karate Kid, though the movie series does provide several perfect examples.