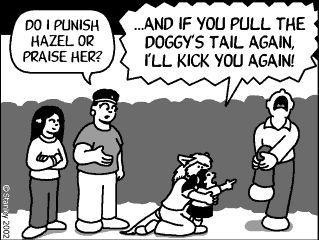 She'll do it, too! Just watch her!
Advertisement:

Little girls kick people in the shins when they're angry. There doesn't seem to be any particular reason for it (sometimes it's that tiny rugrats can't kick much higher, but bigger kids still tend to go for the shins), but fiction writers everywhere seem to have agreed that when little girls are violent, the ideal expression of this violence is to kick people in the shins. Girls' lashing out violently at everyone about them is treated as cute and adorable or as hilarious rather than as brattiness or as jerkassery.

A standard tactic of the Bratty Half-Pint, regardless of gender. A girl who does this is going to grow up to be a Kick Chick (in fact both tropes might come from a similar line of thinking).

Compare with Agony of the Feet. Related to Girl Scouts Are Evil when it is invoked. Compare Groin Attack, in which the kick happens...a bit higher up. Also compare Dismissive Kick.