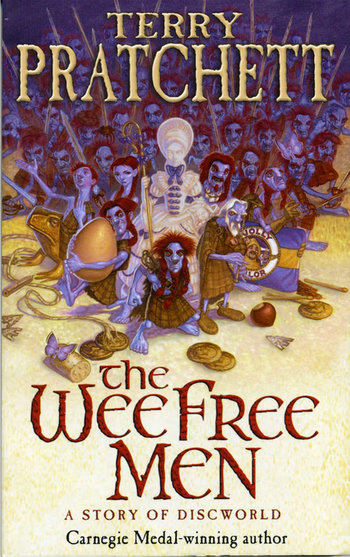 "That was how it worked. No magic at all. But that time it had been magic. And it didn't stop being magic just because you found out how it was done..."
Advertisement:

The 30th book in the Discworld series, the second for young adults and first in the Tiffany Aching apprentice witch series.

The Chalk has a problem. It is an isolated agricultural community near the highly magical region of the Discworld known as the Ramtops. And it has no witches. Not even one.

That means it is about to have Elves.

But Miss Tick, professional witch finder (that is to say, a witch who finds witches and teaches them how they are witches, not the other kind), is on the case. The problem is that you can't be a witch on chalk. Witching needs good strong stone, but her elbow says there's one there already, and she would not be much of a witch if she ignored her own elbow.

Tiffany Aching is the witch. A 9-year-old girl and granddaughter of the late Granny Aching, the best shepherd the hills ever knew and quite possibly a witch herself, not that anyone, possibly even her, knew it. When a monster appears in the local river, she gets annoyed and, using her brother as bait, hits it in the face with a frying pan.

When she sets out to learn more about the monster, she meets Miss Tick, who tells her to wait while she goes to fetch help. She leaves her talking toad to serve as Tiffany's advisor and goes off to get Granny Weatherwax.

Then Tiffany's baby brother Wentworth goes missing, and The Queen of the Elves is to blame. It is at this point that certain people make themselves known.

Noteworthy for being the first Discworld book not to feature Death. As a character, anyway.

Also available in an illustrated edition (art by Stephen Player

) that includes original Bonus Material, such as the transcript of the event that led to the Toad being turned into a toad.

A film adaptation was announced in 2016

, which is to be produced by The Jim Henson Company, with scriptwriting handled by Terry Pratchett's daughter, Rhianna Pratchett.

Preceded by Night Watch, followed by Monstrous Regiment. The next book in the Tiffany Aching series is A Hat Full of Sky.