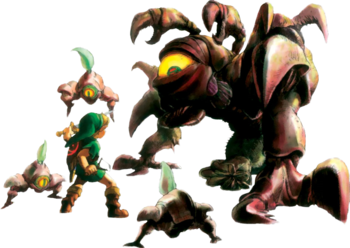 Boomstick: What is it with creatures from the Mario universe usin' their babies as weapons? Is it that effective? I'm gonna have to test this out, maybe some sort of baby-launcher...
Wiz: Boomstick! That is a terrible idea! Anytime you wanted to reload, you'd have to wait nine months!
— DEATH BATTLE!, on Yoshi throwing his eggs
Advertisement:

A creature, very often seen in video game boss battles, which creates smaller versions of itself or gives birth to attack its enemies. Sometimes there is an explanation, such as it being the queen of a race of Bee People or is the Mother of a Thousand Young, sometimes there isn't. Sometimes a monster will just spawn smaller copies and send them after the enemy with no other indication that it is actually female (sometimes it will be explicitly stated as male, on top of things).

This, in video games, tends to happen just to make the boss fight more difficult and/or annoying. Usually these characters have a seemingly endless supply of offspring to launch at potential attackers. It's probably worth noting that eggs don't need to be fertilised.

Natural selection favors those who pass on their genes, which requires at least some of their offspring to survive long enough to reproduce. However, in the case of eusocial insects such as bees, ants, and termites, all but the queens and drones are sterile, so it doesn't matter if they die as long as it helps their mother survive long enough to produce fertile offspring that can pass on their genes.

A sister trope to Tyke Bomb, and subtrope of Mook Maker and Abnormal Ammo. Daughter of Monster Is a Mommy. Related to Flunky Boss and Asteroids Monster. Also a subtrope of Living Weapon and Natural Weapon (since the ability to produce offspring is pretty inherent). Compare Doppelgänger Attack, Proj-egg-tile. Contrast Spawn Broodling: this trope is about attacking or creating allies by giving birth; Spawn Broodling is about attacking or creating allies by making the enemy give birth. See also Drone Deployer.