Literature / A Clash of Kings 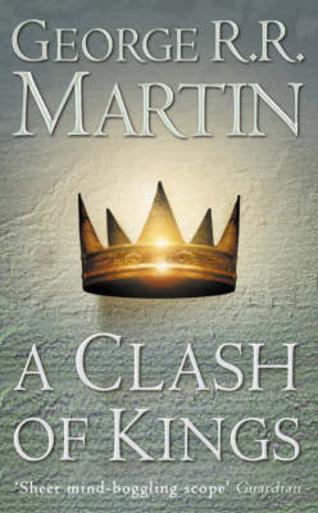 "Crowns do queer things to the heads beneath them."
— Tyrion Lannister
Advertisement:

The second book in George R. R. Martin's Doorstopper A Song of Ice and Fire fantasy series, released in 1998.

Joffrey Baratheon sits on the Iron Throne, but rumors that he is not the king's legitimate heir are spreading throughout the Seven Kingdoms. Everywhere, a king vies for a throne. Robb Stark, called the Young Wolf, battles to secure independence for the North and revenge for his executed father. The Baratheon brothers, Renly and Stannis, each march upon the Iron Throne with a different claim, while on the Iron Islands, Balon Greyjoy prepares a new rebellion, setting his sights on Winterfell. Robert Baratheon's death has set the stage for the War of the Five Kings.

While kings march across the Seven Kingdoms and the people of King's Landing grow more and more malcontent, Jon Snow and his sworn brothers of the Night's Watch travel deeper beyond the Wall, searching for the so called King-Beyond-The-Wall. Across the sea, Daenerys Targaryen begins her journey as a khaleesi, having to nurture and protect her dragons from those who would take them...

There are nine POV characters in this novel, with Stannis Baratheon's Maester Cressen narrating the prologue:

The novel was adapted as the second season of HBO's Game of Thrones.

A Clash of Tropes: