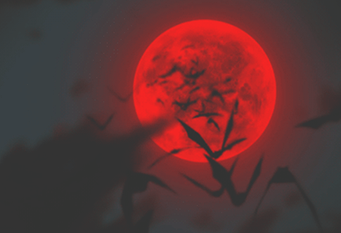 When the epic struggle is just around the corner, ominous portents are going to come out of the woodwork. Well, what portent more ominous than the heavens themselves?

A blood-red celestial body that wasn't there yesterday, without exception, means things are about to take a nasty turn. If the Bad Moon is itself the threat, as in a Colony Drop or similar, you'll most likely be able to prevent it. If the star-gazers are getting a light show Because Destiny Says So — yeah, people are going to bleed.

This portent has its roots in the old myth about "blood on the moon," how a reddish ring around the moon was a sign of bad things to come and also in the myths about comets and other celestial movements being portents, often of death, war or plague. It is in fact caused by the very real astronomical event known as a Lunar Eclipse (the moon passes directly behind the Earth and into its shadow).

See Lunacy for when the moon is actually the trigger of events on Earth. This is commonly, but not necessarily, a Weird Moon.

See Comet of Doom when the bad thing in the sky is an oncoming comet.

A subtrope of Alien Sky and Portent of Doom. See also The Stars Are Going Out and When the Planets Align. Not to be confused with Melancholy Moon. Also has nothing to do with characters expressing contempt or displeasure or immaturity by exposing their buttocks.

The Greens' first Halloween in Big City is ruined when a blood moon rises and turns all the farm animals into man-eating zombies.

The Greens' first Halloween in Big City is ruined when a blood moon rises and turns all the farm animals into man-eating zombies.