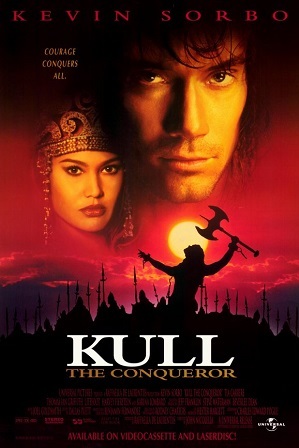 Kull the Conqueror is a 1997 Heroic Fantasy film featuring Kevin Sorbo as the eponymous hero and Tia Carrere as Big Bad Akivasha.

After the mad king Borna kills his successors, the throne unexpectedly falls to outsider Kull, a barbarian from Atlantis. The king's cousin and the captain of the guard both lust to become king and remove Kull, reviving an ancient red witch to help them.

It was intended as a sequel to the Conan the Barbarian movies, but the character was changed to Robert E. Howard's older character Kull after Arnold Schwarzenegger's refusal to reprise the role.

Not to be confused with the similarly-named Sci-Fi film Krull.