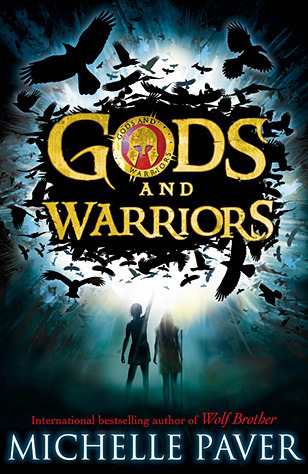 "If an Outsider wields the blade, the House of Koronos burns…"
—Tagline
Advertisement:

Gods and Warriors is a series of children's fantasy novels by Michelle Paver, the author of Chronicles of Ancient Darkness. The theme is very similar to that series, except that instead of taking place in stone-age Northern Europe, we adventure in Bronze Age Mediterranean. Also, instead of wolves, our loyal animal companions include a dolphin, a lion, and a falcon.

The country of Akea (the ancient name of mainland Greece) is a land of scattered chieftaincies separated by great mountain ranges and forests. In Lykonia (the present-day Lakonia) lives a boy named Hylas. He's an Outsider, the lowest of the low, and he has herded goats on the slopes of Mount Lykas for his whole life with his little sister Issi and dog Scram. One day, Scram is killed in an attack of ruthless warriors everyone calls Crows, and Issi goes missing. As Hylas tries to survive and find her, he gets his hands on a bronze dagger called the dagger of Koronos, the heirloom of the House of Koronos, the clan that leads the Crows. Desiring to reclaim their dagger that makes them invincible, the Crows try to kill all the Outsiders they can find because an Oracle told them that "if an Outsider wields the blade, the House of Koronos burns". Unfortunately, Hylas' best friend Telamon, the son of Lykonia's chieftain, turns out to be a member of the House of Koronos, which pits them against one another. Hylas soon meets and befriends Pirra, the daughter of the High Priestess of Keftiu (the author's name for Crete) who's never been let out and decides to run away to escape an arranged marriage. As they fight against the Crows and try to find Issi, they travel across the Mediterranean Sea and get help first from a dolphin, and then from a lion and a falcon.

The series contains five books, with the first one released in 2012 and the last one in 2016:

Be careful of Late Arrival Spoilers listed under the sequels.