Literature / The Gods of Guilt 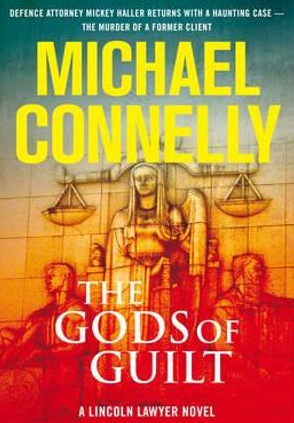 The Gods of Guilt is a 2013 novel by Michael Connelly featuring Mickey Haller. It's the fifth novel featuring Haller as protagonist, although Haller appears as a supporting character in several novels featuring his half-brother, Harry Bosch.
Advertisement:

Defense attorney Mickey Haller is in a bad place both professionally and personally. His run for District Attorney blew up after a guy that Haller helped beat a DUI rap then went out driving drunk again and killed two people. The scandal rendered Haller's political career stillborn and estranged him from his daughter Hayley, whose classmate was one of the two people killed. And his law practice has been hurt badly enough that Haller has been left to scrounge around arraignment court trying to pick up any clients he can get.

Haller gets a better job when one Andre La Cosse asks for Haller to defend him on murder charges. La Cosse is a "digital pimp" who arranges internet bookings for various fancy prostitutes, and he has been accused of murdering a client, Gloria Dayton. Gloria Dayton is a former client of Haller's whom Mickey once tried to help get out of the life. Haller's investigation into the La Cosse case and his old friend's murder leads to a dark tale of conspiracy and corruption within the LAPD and the DEA.