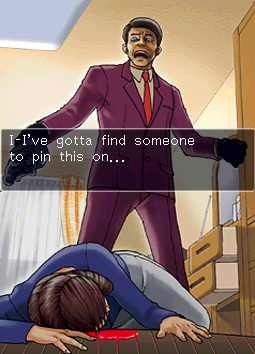 "Someone like... him!"
Chief Wiggum: Hey, I crack cases all the time. Like the case of the symphony conductor who murdered his star cellist.
Lou: That was an episode of Columbo, chief. They show you who the bad guy is at the beginning of each one.
Wiggum: Yeah, but you have to remember!
— The Simpsons note Referencing a specific episode of Columbo
Advertisement:

Also known as the "open mystery" or "How To Catch Them"; a style of Crime and Punishment Series show popularized by Columbo, which used this setup for nearly every episode.

The "mystery" for the viewer is not "whodunnit" but "howcatchum." We know who, what, where, when, and why, perhaps in more detail than the detective will ever know. For the viewer, the question is: how will the detective solve what appears to be a perfect crime?

A successful Reverse Whodunnit requires a very intelligent criminal, capable of designing a crime complex enough that its solution remains interesting even if you already know who did it and why.

It also requires a far cleverer detective than you can get away with in a standard Whodunnit, because the writers can not rely so much on misdirection to make his job look hard. For example, solving any Scooby-Doo mystery would be trivial if Velma let the audience get a good look at the clues instead of hiding them until The Summation.

Sometimes called a "procedural" (not to be confused with the Police Procedural), because its focus is on the procedure rather than the solution.

This was probably invented by R. Austin Freeman in 1912, in a short story collection which featured Dr. Thorndyke. He called this concept the 'inverted detective story'.

A subtrope of Internal Reveal. Compare and Contrast both Clueless Mystery and Fair-Play Whodunnit.