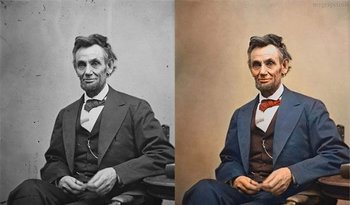 In case you forgot that history wasn't in black and white (results may vary).
Advertisement:

Colorization is the use of various techniques and technologies to add color to a work that was originally made in black and white. The concept existed for a long time, even being used in some of the earliest films produced via general tints (such as purple or bronze), but the overall painstaking process and lackluster results did not do much for the field. It wasn't until digital colorization developed in the 1970s that you could make more naturalistic colors and overall pass for having been originally filmed in black and white.

The use of colorization is often controversial, as changing the look and tone of a film after it was made is seen by many as equivalent to defacing art. Also, choosing the colors that are going to be used is often just guessing since there's no way to know how the movie set, props and costumes really were when the movie was filmed. Like most things, it can also be used in service of the story and attract attention to an Updated Re-release. In comics, at worst, it can lead to complaints.