Western Animation / Who Killed Who? 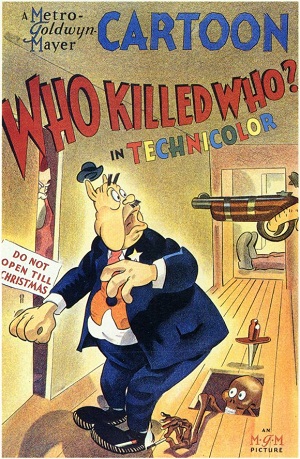 "Who Killed Who?" is one of the early Tex Avery MGM Cartoons, created in 1943. The short is a pastiche of whodunnit cases.

Beginning with a live-action announcer proclaiming the cartoon as an educational example of how crime doesn't pay, it is set in an old, spooky house on the "Gruesome Gables". The elderly owner is murdered (how dead he is, though, is a matter of question) and, seconds later, a crafty detective arrives to investigate — but he finds out that the house is a haunted and wacky place, where finding and unmasking the murderer might prove very problematic.

The cartoon short provides examples of: