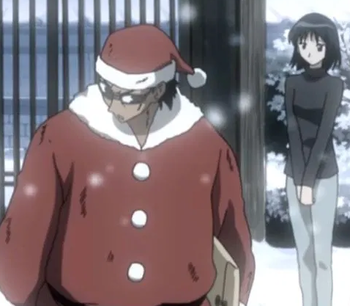 The Japanese adore the secular parts of Christmas. They're also rather fond of Santa Claus.
Advertisement:

While they won't let it get in the way of the plot too much, they will give a nod to it in some anime episode plots.

The Surprise Santa Encounter goes like this. The characters are running around doing whatever...and then suddenly, Santa Claus! Right there!

...no, actually, it was someone else (often one of the main characters) wearing a Santa disguise for no particular reason. We now return to the plot.