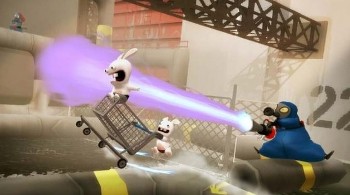 This is a strange game.

Rabbids Go Home is a game from the Ubisoft Montpiller studio, home of game design guru Michel Ancel. This game features the Rabbids of Rayman Raving Rabbids fame — specifically, more fame than Rayman — but with Ubisoft having heard the complaints over the Rabbids' spotlight stealing, this isn't a Rayman game anymore; Rayman himself is completely absent. It forgoes the semblance of Rayman's weird, dreamlike homeland and instead takes place in something resembling the "real" world (for certain values of "real").

The Rabbids live in a junkyard, where they spend their days "BWAAAAAAH!"-ing and, um, playing in a brass band. But they get it into their heads one day to "go home!" And where is their home? Well, since they're patently ridiculous, it must be the moon! (Which has some interesting implications from a mythological standpoint, but that could be accidental.) But the Rabbids aren't generally so good at flying spaceships. So, instead, they decide to reach the moon by... building a giant pile of stuff. Which will then allow them to jump off and land on the moon. It makes sense to them, at least. But where will they get all this stuff? Well, the humans sure have a lot of stuff. And their city is right nearby!

The game plays out like a...hmm. Well, that's actually a good question. Most publications viewed the game as some combination of a Platformer, a Racing Game, and an Adventure Game, so we'll go with that too. Oh, and if it can be considered a genre, Katamari Damacy. You control two Rabbids in a shopping cart. You have to collect stuff. And break things. And collect dogs. And literally scare the pants off humans. And collect their pants. And infiltrate hospitals to collect patients. And collect stuff. ...Did we mention this game was weird?

The DS version is vastly different as it plays out like a puzzle game where you have to place parts like slopes, spring-loaded boxing gloves, bulls and teleporting washing machines to guide an uncontrollable shopping cart with a Rabbid inside around a course to collect everything and land in a toilet. You then have to build the tower by shooting either toilet rolls or football helmets into containers to fill them. The game also changes the reason why the Rabbids want to go to the moon: They found out that they can tickle themselves with electricity thanks to a broken street lamp. Several hours later, they break every street lamp in the area and can't tickle themselves anymore. One Rabbid looks up at the moon and thinks that it's a giant lamp that provides endless electricity, so they come up with their giant pile plan.