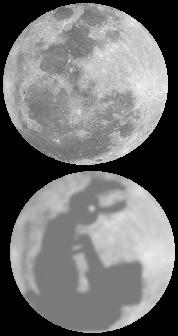 Because the Knight plunging a toilet doesn't quite have the same ring to it.
Advertisement:

Observe the full moon sometime and take note of its shadows. If you look at it in a certain way, you may notice that its shape resembles that of a rabbit standing over a mortar.

This is the Moon Rabbit or Jade Rabbit. A myth that came from China, legend has it that the rabbit we see serves under the moon goddess and pounds the elixir of life for the immortals. The idea of a rabbit on the moon resonated so well that it spread to other countries under Chinese cultural influence like Japan, Korea and Vietnam, though in their version, the rabbit isn't pounding the elixir of life but simple rice cakes instead.

While the Asian version of this legend is the most widespread in modern times, they weren't the only ones who saw the rabbit in ancient times. The Aztecs and other Mesoamerican cultures also saw the rabbit in the moon (minus mortar) and had their own tales on what it is and how it came to be. One of their most famous legends state that the rabbit we see was thrown there as an insult to the arrogant and cowardly moon god, so that its luster will not be equal to the noble sun god's.

A famous mythical figure, the Moon Rabbit appears in several popular media, either in the form of the actual creature or as a winking reference to the legend. They're mostly found in Asian media, but there have been sightings in non-Asian countries as well.

For the version more popular in Western culture, see The Man in the Moon. They may be associated with a God of the Moon, if not outright gods themselves.