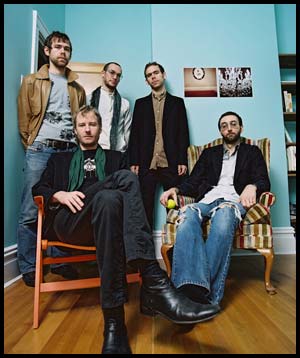 They started out with a small underground following in 1999, producing mostly So Okay, It's Average albums and EPs, until their 2005 album, Alligator which turned them into critical darlings. From there, their albums continued to get better. In 2007, their album, Boxer was featured on many "Best of the Year" lists, and in 2010 their fifth album, High Violet won them further critical attention. The album has even been in competition with Arcade Fire's The Suburbs and Beach House's Teen Dream in year-end charts. In 2011 they provided a song featured in Portal 2 at the request of the developers and performed "The Rains of Castamere" for the 2012 season of Game of Thrones. The golden run then continued in 2013 with the release of their sixth album Trouble Will Find Me. This one only continued their increasing popularity, and the band would go on a brief hiatus to produce side projects like EL VY, Pfarmers, and LNZNDRF, all with a more psychedelic bent. This experimentation would feed into their next album, Sleep Well Beast, preceded by the surprisingly upbeat "The System Only Dreams In Total Darkness." They returned in 2019 with I Am Easy To Find, produced by director Mike Mills.

Unlike many bands in the Indie/Alternative movement, they don't rely on of happy/poppy or aggressive hooks to keep their music going. Instead they focus on sombre, tug-at-your-heartstrings type of music. Matt Berninger's Baritone vocals provide very bittersweet lyrics accompanied by the band that keeps a lush sound spiraling in the background. Many people claim that their music helps them through depressing times in their lives and actually uplifts them. Other people tend to call them too melancholy and dismiss them in the same manner as Radiohead gets dismissed.

Not to be confused with the CBC's flagship evening News Broadcast.

The National contains examples of the following tropes: