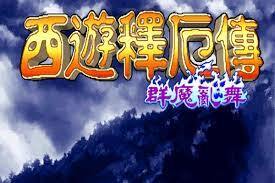 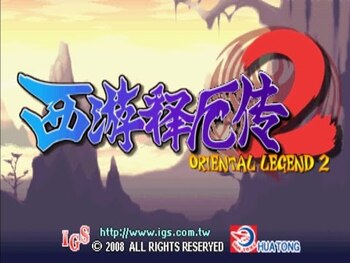 Oriental Legend (西遊釋厄傳, lit. Journey to the West - Battle Against the Demons) is a 1997 arcade Beat 'em Up video game developed by Taiwan's International Games System Co., Ltd., loosely - very loosely based on the Chinese literary classic, Journey to the West.

Much like the novel, the game have the player characters as the various disciples of Xuanzang, on their long pilgrimage to the west. But their journey is interrupted when Xuanzang gets abducted by demons intending to feast on his flesh, and the disciples must venture through various locations lifted directly from the novel, including the Lair of the Horned Kings, depths of the Heaven Reaching River, the Cave of Silken Web, and the Mount of Flames, infested with demons and monsters that many fans of the novel would undoubtly find familiar.

The game allows up to four players at once.

A sequel (actually a Stealth Prequel) is released in 2008 (11 years later), which rehashes much of the original's plot, including re-visiting redesigned stages and bosses, but with new characters added.

Players can select between five heroes (YES, five - even though Xuanzang canonically have only three disciples in the novels and most adaptations, but just roll with it), each of them with their unique weapons and powers that can be unleashed as a Smart Bomb attack: