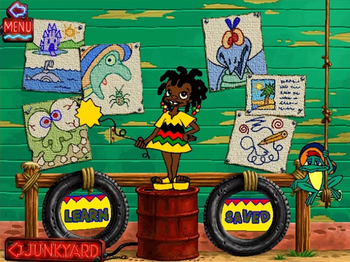 "Just go ahead and click on whatever you want to do."
Edutainment Game created by Brøderbund Software in The '90s.
Advertisement:

In Westmoreland, Jamaica, an imaginative girl named Orlando (everyone calls her Orly) lives with her family and friends. She often has incredible imaginary adventures with her frog friend, Lancelot. Within the program itself, children draw the many elements of Orly's stories.

There is also a storybook creator and a doodle pad.

The program can still be found in some educational software packs.