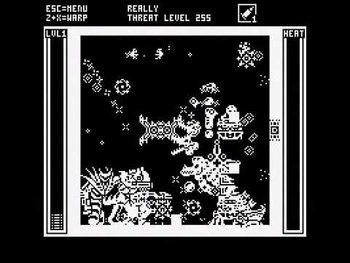 Hey, let's put all bosses in a single room!
"Just send out the Big Bad!"
—Lea, shortly after the third boss fight of eleven, the second of which was a Sequential Boss, Kingdom Hearts III

This trope generally comes into play during the final stage, dungeon, or chapter of the game (though it can rarely show up during another climactic part of the story, such as the Disc-One Final Dungeon). In these areas, the boss density is much higher than in the rest of the game, perhaps to test the player's skills or to make it seem like the Big Bad is finally pulling out all the stops. Note that it is the contrast of this area with the rest of the game that is important: A final dungeon with four Mini Bosses would qualify if every other dungeon only had one boss, but not if that many bosses was the norm.

May involve a Giant Space Flea from Nowhere or two, if only because the sheer number of bosses makes each individual boss less significant. On the other extreme, you could end up cutting down well-established villains en masse, which may evoke the feeling of a Cosmic Deadline.

Super-Trope to Boss Rush, wherein the majority of the battles in the Bonanza are rematches against earlier bosses.note Note that if this is the first time you actually fought a "Well-Established Villain", then it wouldn't count as a rematch.

As this trope is mostly found near the end of a given game, spoilers will be unmarked. You have been warned.