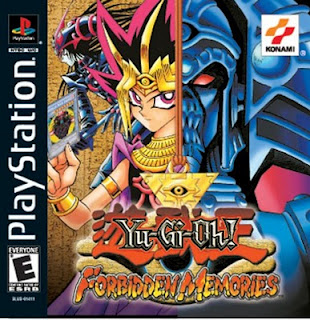 Yu-Gi-Oh! Forbidden Memories is a Yu-Gi-Oh! video game for the PlayStation. The game takes place in both modern times and Ancient Egypt, and the player character switches accordingly. Throughout most of the game, the protagonist is Atem, the Prince of Ancient Egypt. After the high priest Heishin and his right-hand man, Seto, overthrow the Pharaoh, he sets out to free Egypt from Heishin's tyranny and is accidentally transported to modern times, where Yugi is dueling in a tournament. The prince must find his way back, collect the Millennium Items, and defeat Heishin and Seto once and for all.

The game serves as an Alternate Universe to the manga and anime. It has two sequels, Yu-Gi-Oh! The Duelists of the Roses and Yu-Gi-Oh! The Falsebound Kingdom.

The game was one of a few that were released before the trading card game was, and as such, uses prototype rules that were originally considered for the TCG. Major differences include no tributes being necessary to summon level five and higher monsters, all monster cards being normal monster cards, only one card being placed on the field each turn, fusion being done without the card Polymerization, and the majority of the possible fusions not being actual fusions in the TCG. The game is additionally poorly balanced, with the vast majority of cards being monster cards, and the few magic and trap cards having simple effects that are usually not useful, while the ones that are useful are nearly required to beat the game.