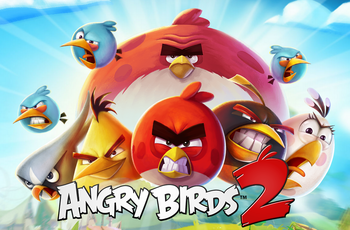 Angry Birds 2 is the official sequel to Angry Birds. It was soft-launched in Canada under the name Angry Birds: Under Pigstruction on March 5, 2015 and was released worldwide on July 30 of that year.

While the story is the same (the birds are after the pigs for nabbing their eggs, this time by chasing after their airship where the eggs being held) and gameplay is fundamentally the same, there are many changes that make the game feel totally different from the original. The graphics, sound effects, and animations are much more advanced, there are more features, including incorporates many of the elements that were introduced in previous AB Spin-Off games, such as adding a limited life system. The birds' & pigs' character designs have also changed based on the Angry Birds Toons series, most notably introducing a new bird, Silver, who does a backwards loop and plummets straight down with great force.

Not to be confused with the sequel to The Angry Birds Movie.