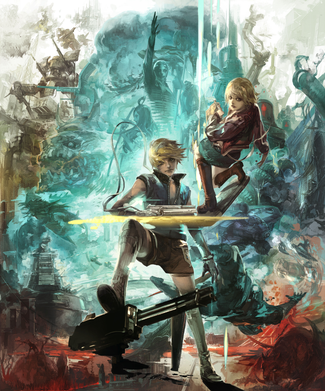 "We run like our lives depend on it... because they do."
Sin and Punishment: Star Successor (Successor of the Skies in Europe) is the Wii sequel to the Nintendo 64 rail shooter Sin and Punishment by Treasure.
Advertisement:

The gameplay resembles the original, in that the screen moves along a fixed path while the player moves and maneuvers around it, shooting down everything as they go. But the sequel adds the ability to hover and fly in the air, adding an element of the 2D Shoot 'em Up, along with the great advantage of Wii remote aiming and two playable characters with different gameplay styles.

The plot isn't as much of a Mind Screw as the original. The story is set in the midst of a war between Inner Space and Outer Space that has lasted for aeons, having escalated in the time gap between the original game and the sequel. Inner Space's outposts are seven Earths, each slightly different, and ultimately presided over by "the Creators" (a fancy way of saying "Gods").

On Earth-4, an alien spy from Outer Space appears. Isa Jo, the son of the protagonists from the original game, is dispatched to destroy the spy using his strange inherited powers. But when he eventually finds it, there's a problem — it's now a "she". It's taken the form of an utterly innocent, amnesiac girl. All she can remember is that her aim was to find out about humans, and that part of her name was "...chi..."

Isa is intrigued and surprised by the girl, whom he dubs Kachi, and decides that alien or not, he's not going to kill her. The Creators aren't especially happy about that. The Nebulox, five devout servants of the Creators with superhuman abilities, are sent to initiate some... forcible persuasion. Isa and Kachi flee, but sometimes the only thing left to do is fight.

Conceived by Treasure not long after the Wii came out, and green lit due in no small part to the sales of the original game on Wii Virtual Console. Sin and Punishment 2 was released, with full English and Japanese voice-acting to boot, in Japan on October 29, 2009, in Europe on May 7, 2010, and in North America on June 27, 2010. So now it's even less of a Widget Series.