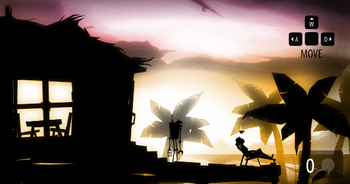 The opening dream. Oh, and the player is that creepy-looking robot to the right.
Our hero, Skinny wakes up from a seemingly ideal dream, to be greeted by the enigmatic mechanical being calling herself "Mama". She tasks him to find the batteries powering the chairs into which her "little-ones" are strapped. However, the batteries were stolen by a little boy called Felix. Skinny begins his quest, but starts questioning Mama's motives.
Advertisement:

. Oh, and its developer went on to create Pinstripe.

Felix: Wanna play a game? It's called Kill the Mama.