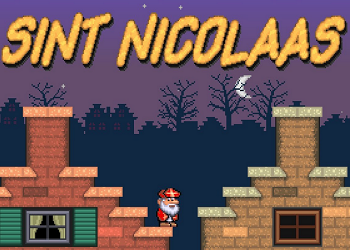 Sint Nicolaas is a 1998 PC Platform Game by Wiering Software in which you play as Sinterklaas, the Folk Hero who drops presents and cookies though chimneys for children on each December 5th. To clear the levels, you must drop five cookies in each chimney and drop the presents in the order you got them. Lots of Backtracking will ensue.
Advertisement:

has been ported to Adobe Flash and can be played here

. There is a free Android version as well.

Two sequels exist. Sinterklaas has him having to climb the houses from ground level to drop the presents and Zwarte Piet plays like the first game, has 3D graphics and stars Sinterklaas' helper.