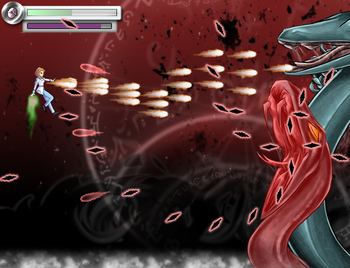 Celeste fending off a nasty Rayth invasion.
SkyE is a 2009 freeware Shoot 'em Up, created by Anaryu and Krisanna. It’s made in RPG Maker VX, and is one of the few examples of a schmup made in this engine. It is also a rare example of a schmup which possesses an extensive plotline.
Advertisement:

It follows Celeste, a newly graduated Sky Knight who investigates a Rayth outbreak at the Chromadus Academy for Raye Engineers and Directors. The gameplay is thus split between Visual Novel-style sections where Celeste visits one of the locations in the academy to converse with whichever one of a large cast of characters is present there at the time and glean more information about the world at large and the mystery at the academy, and the Rayth invasions which inevitably interrupt these conversations and have to be fended off by Celeste, before her investigation can resume.