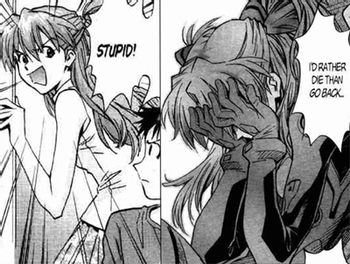 Poor Asuka. She just wants some love. She won't admit it in a million years.
"It's amazing how I can feel sorry for you and hate you at the same time. I'm sure there's a German word for it."
— Lisa Simpson to Bart, The Simpsons, "How Munched Is That Birdie In The Window?"

Normally, The Woobie is a sufficiently Moe character that:

The Jerkass Woobie produces a different visceral reaction: you'd like to punch them in the face yourself and you also want to hug them and say, "I'm so sorry that your life is such a mess."

This character type is defined by three elements:

This isn't a case of Defrosting Ice Queen, Sugar-and-Ice Personality, or Flanderization. The character is just that complex. From both the fans and the other characters' point of view, the character can come across as an Anti-Hero of the worst sort, or just plain nuts, and there may even be a Broken Base over whether they are a Karma Houdini, got what they had coming, or were more victim than villain. They likely think of themselves as a Butt-Monkey or Cosmic Plaything, which, really, they kind of are. It also helps if the audience gets to see just why the character is always in such a bad mood. Being the Only Sane Man or Surrounded by Idiots can take its toll on even the most patient of souls. Typically, the trope is Played for Drama or Played for Laughs as a justification for Jerk Justifications or Jerkass Dissonance.

This character type may:

The difference between this and an Ineffectual Sympathetic Villain is that an Ineffectual Sympathetic Villain is often a borderline Harmless Villain and their nasty schemes fail so miserably that you start rooting for the author to Throw the Dog a Bone while this character's evil is often less about schemes and more just a mean streak. The character's woobie nature may also play a factor in the phenomenon of All Girls Want Bad Boys.

Contrast Woobie, Destroyer of Worlds, where a tragic but less cruel character destroys everything around them because they have already been broken. The Jerkass Woobie's cruel acts are generally not a result of him being broken and his suffering may even come after he has sinned. Not to be confused with Put Them All Out of My Misery, where a sympathetic villain seeks large scale destruction out of a desire to end misery. See also Draco in Leather Pants, where one of these happens accidentally.

Jerk Sue is a failed attempt at this trope, where the author attempts to make his/her mean OC sympathetic by laying out a stock tragic backstory for him or her then having the rest of the cast ooh and aah about it unless they are the Designated Villain, in which case they will act extremely petty for no reason and probably be revealed as Just Jealous before dying in an over-the-top "comedic" fashion so Sue can be "right all along". Unintentionally Unsympathetic can also result if the character feels heavier on the jerkass part and the bad things that happen to them feel more like karmic punishments, while the opposite will happen when the character gets punished for no reason because they’re just “The Bad Guy”. A true Jerkass Woobie, even if they truly suffered in their past, may still not get sympathy from all of the people around them and certain types of characters probably wouldn't be quick to forgive them for their behavior, either, i.e. the author and story allows both the other characters and the audience to choose for themselves whether to hate or forgive them, and doesn't try to force forgiveness out of either. Just because the audience has knowledge about something doesn't mean that every character should know, and it doesn't make the character a "bad guy" for calling out another character for being a jerk even if they are intended as sympathetic.

Put another way, this is what you get when the author invokes a Base-Breaking Character.

If this character type ever sheds tears or outright cries, you can bet it will most likely be a Cry Cute moment.

If you're looking for a few more pointers on writing this kind of character, take a look at our analysis page on Woobies as a whole, particularly the "'Just Desserts' test" section.

Despite all the horrible things he did to the Freelancers, Carolina and the Alpha, one can't help but pity the Director due to his motives and what has become of him by the end.

Despite all the horrible things he did to the Freelancers, Carolina and the Alpha, one can't help but pity the Director due to his motives and what has become of him by the end.