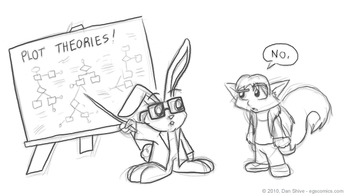 Martha: I thought you were going to say [the Master] was your secret brother or something.
The Doctor: ... You've been watching too much TV.
— Doctor Who, "The Sound of Drums"
Advertisement:

A fan gets Jossed when the elaborate Epileptic Trees or Fanfic that they've lovingly built upon canonical elements is abruptly disproved by further canon or Word of God. Named after Joss Whedon; Buffy the Vampire Slayer was notorious for this. Fans would come up with detailed and elaborate theories or plots during summer hiatuses, most of which got completely thrown out within three episodes of the new season.

May lead to Fanon Discontinuity when disgruntled fans prefer their own fanon over the canon. In extreme cases, critics and fans may invoke Death of the Author to preserve their interpretation of events.

Note that in some circles, the term "Jossed" refers to a gutwrenching main character death, which Whedon is also famous for. This definition entered the populace when during a Q&A session at an Australian university, a young Aussie girl noted his tendency to do horrible things to on-screen couples, and to much laughter, said "We call it getting 'Jossed'". Other sources also use this term as "shocking plot twist." This trope deals only with the "classic" definition.

This has two opposites: I Knew It!, where the fan theory is proven to be true by a twist that was planned all along, and Ascended Fanon, where the author decides to promote some fanon elements to canon status. The inverse of this is Shrug of God, where the author refuses to say that one answer is more "correct" than another.

For specific cases of fan works being disproven and not simple guesses, see Outdated by Canon.