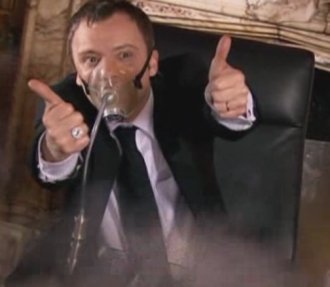 "You're Insane!"
"That's him. He's Prime Minister. The Master is Prime Minister of Great Britain... the Master... and his wife?"
— The Doctor
Advertisement:

The one with the drumming — and decimation set to "Voodoo Child". Also, a rare correct usage of the word "decimation".

The Doctor, Martha and Jack return to 21st century Earth, using Jack's (quickly fixed) Vortex manipulator. The Master has been on Earth for 18 months, limited by the Doctor's last-ditch block of the TARDIS controls. As for the reason he'd been living as a human: he was resurrected by the Time Lords to fight in the Time War, saw what was required of him, and ran as fast as he could to the end of the universe.

It turns out the Master is actually Mr. Harold Saxon, who has been elected Prime Minister, and the first order of business is killing his Cabinet. Using the Archangel phone network, he's not only blocked his own Time Lord energy from alerting the Doctor, but subtly brainwashed most of the population into trusting him and accepting his fabricated life story. The brainwashing signal is encoded into a four-beat rhythm that's been in the back of his head ever since he was a child. (This will be very important in a few series.)

This incarnation of the Master turns out to be just as manic as Ten, combined with a real love for mocking people, dancing to catchy pop music and snogging his very hot — and very hypnotised — wife, Lucy. The Doctor phones him up, leading to one very special conversation:

The Master: Doctor?
The Doctor: Master.
The Master: [sigh] I like it when you use my name.
The Doctor: You chose it. Psychiatrist's field day.
[about half a minute of exposition later]
The Doctor: I've been alone ever since. But not any more. Don't you see? All we've got is each other.
The Master: ...Are you asking me out on a date?

Anyway, Saxon labels the three as fugitives and they end up on the run. Also, the TARDIS, which had been restricted by the Doctor to only travel between now and the end of time, has been turned into a Paradox Machine.

Jack and Martha share a moment when they realise they're both crushing on the Doctor, though he appears to be Oblivious to Love. The Doctor also talks about an event that Gallifreyan children go through before they can enter the academy: they have to look into the Untempered Schism, which shows all of time. Apparently this drove the Master mad.

Eventually the three sneak on board the Valiant, holding TARDIS keys with perception filters. Here, the Master alleges to be arranging first contact with a race of aliens called the Toclafane. But that's a name from a Gallifreyan fairytale — whatever these creatures are, they're lying, and the Master is parading it under everyone's noses.

The perception filters fail to work on the Master, and all three of our heroes are soon caught. The Toclafane assassinate the US President (who, with the help of UNIT, attempted to take command of the situation away from the Master), and the Master reveals he has started using a laser screwdriver as opposed to a sonic, and sics the weapon on his nemesis. The Doctor is heavily aged by the Lazarus technology, using the hand from the Sycorax fight that Jack used the last episode. Badly weakened, he demands to know who the Toclafane really are, but all the Master says is that the truth would break his hearts.

With the whole world watching, the Master gets to the point: tough luck, Puny Earthlings, it's the end of the world.

The Paradox Machine kicks into gear and the sky itself seems to tear open, disgorging six billion Toclafane. At the Master's command, they begin to literally decimate the population. Martha teleports herself to Earth, still holding a perception filter, swearing that she will return.

Alternative Title(s): Doctor Who NSS 3 E 12 The Sound Of Drums