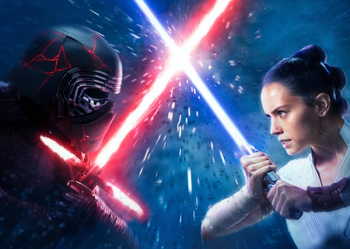 You can tell who's good and bad because the bad guy's weapon is scarier looking that the good guy's.
It's common for The Hero to have an Arch-Enemy; moreover, if the hero has a suitably powerful weapon or Iconic Item, it may be that said weapon or tool will also have an antithesis, which is similar in appearance and powers but is used to opposite ends.
Advertisement:

The hero's iconic weapon and its nemesis tend to share a common origin. Probably they were both Forged by the Gods or at least by the Ultimate Blacksmith. In this case, they are much like Evil Twins. Alternatively, the nemesis may have been made as an Evil Knockoff of the original, and specifically designed to defeat it. Creating a good weapon to defeat an evil one is more rare. Depending on their relationship, the nemesis weapon may have powers that are the same as those used by the hero, or they may be the exact opposite; indeed, if the hero's is an Empathic Weapon, the other will probably be an Evil Weapon.

The nemesis weapon is likely to be used by the Big Bad, but might also go to The Rival, The Dragon or another lesser enemy. It can also change hands as these are defeated, being acquired by more powerful foes. Similarly, the 'good' weapon may be wielded by The Lancer or some other secondary heroic character.

The weapon may signify its wielder as an Evil Counterpart to the hero, or otherwise hint that they are Mirror Characters in some regard. It also serves to amplify the hero's challenge, by negating the advantage their weapon gives and forcing them to rely on their inherent skills, virtues, or greater number of allies to win. Because of this, the nemesis weapon is more likely to appear near the end of the story.