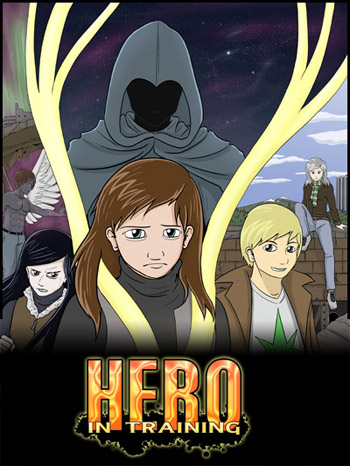 is an Adventure webcomic exploring ideas about heroism.

While the predominately teenage lead characters, their relationships with each other and colorful character backgrounds may remind people of El Goonish Shive and The Wotch (and the author likes those comics), Hero In Training itself is darker and less wacky.

The comic centres around the main character's transformation into a hero, via the tuition of a godlike entity that apparently does this for all heroes, everywhere, anywhen. The powers are mostly not active, and the hero has no idea he's using them, but they alter luck and probability to create strange and implausible situations, from alien encounters to run-ins with paramilitary. Eventually, events begin to spiral out of control and the dramatic events that were originally thought to be due to The Protagonist become more far-reaching and sinister.

Hero in Training plays around with tropes the author created the early plot as a satire of Sunnydale Syndrome in other webcomics.

On indefinite hiatus since April 2013.