Literature / Bimbos of the Death Sun 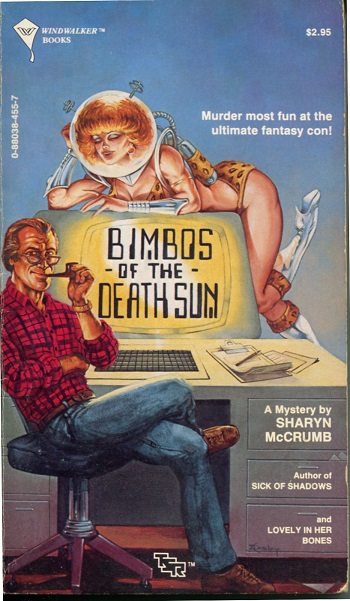 Award-winning 1988 Whodunit by Sharyn McCrumb which combines a serious murder mystery with the scariest world of all — fandom.

James Owen Mega is just an ordinary guy, a professor of electrical engineering at Virginia Tech. What very few people realize is that he is also Jay Omega, one-time science fiction author — and that's exactly how Jay wants it. His novel was a serious, hard SF story, but by the time the second-rate publishing house got through with it, it was saddled with a Frank Frazetta-esque cover and the title Bimbos of the Death Sun. Though he attempts to bury his Old Shame, his girlfriend Marion Farley, the college's assistant professor of English, books him as a guest at Rubicon, a local SF convention. There, they meet the onerous Appin Dungannon, author of a Conan-like series of novels and owner of an incredibly short fuse and colossal ego. Some time between the costume contest and the celebrity Dungeons & Dragons game, however, Dungannon is murdered, and Jay and Marion do a little investigating of their own.

Five years later, McCrumb wrote a sequel, Zombies of the Gene Pool. It has Jay and Marion learn that one of their fellow professors is a member of the Lanthanides, a group of SF fans who fancied themselves up-and-coming legends and buried a time capsule before parting ways in the late 1950s. They accompany him to the reunion/opening of the capsule, where the Lanthanides' prodigal son, embittered former fan Pat Malone, has apparently come Back from the Dead and threatens to expose devastating secrets about his former friends. He is murdered that night, and once again Jay and Marion attempt to investigate.

These novels contain examples of...