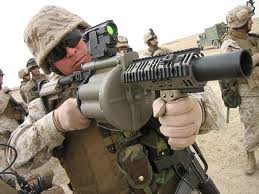 "You mustn't be afraid to dream a little bigger, darling."
Advertisement:

Throwing grenades is great and all, but sometimes it's better to shoot them. That's where the Grenade Launcher comes in. Size varies from an accessory to a BFG. Possibly related to Revolvers Are Just Better if it's the kind with the ginormous loading cylinder (The M32 is the most famous of these). Also included are the older concept of rifle grenades

, grenades designed to be fired by sticking them on the end of a rifle and loading/firing a special powder cartridge.

Grenade launchers in Video Games tend to behave in an unrealistic fashion. A real launched grenade primes itself after flying a certain distance (so the users won't accidentally blow themselves) and then explodes as soon as it hits something, doing damage to everything near it. In video games, launched grenades tend to behave more like thrown grenades, ricocheting off the walls and exploding with a timer. Sometimes, grenades can inexplicably tell the difference between living targets and scenery, exploding on contact with the former but not the latter. No "Arc" in "Archery" is usually averted with them, as like thrown grenades they are usually meant for arcing over cover. If an accessory, they can be used under Secondary Fire.

Nader's special ability is that she can fire a grenade launcher.

Nader's special ability is that she can fire a grenade launcher.