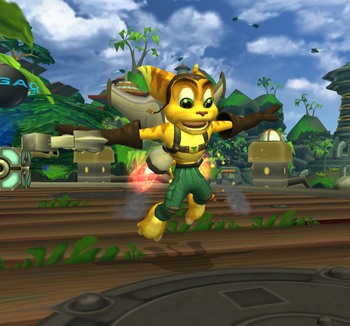 A device that helps propel its user forward, backward, etc. quickly. Unlike a Jet Pack, it doesn't grant flight, but it can help jumping In a Single Bound, Double Jump, hovering in the air temporarily, slowing descent, or being used in a Dash Attack or Video Game Dashing. Sometimes a Jet Pack designed for use in low gravity can be used as a Jump Jet Pack while on earth, or vice versa.

In most video games, the Jump Jet Pack has a fuel meter that only replenishes when it is not in use.