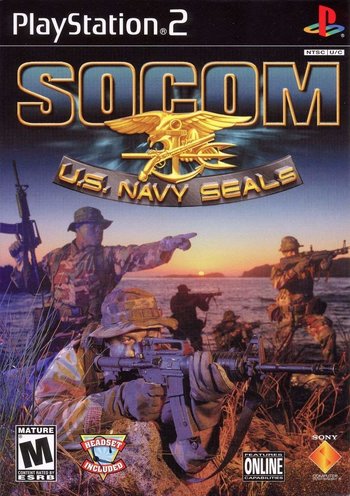 Probably the Counter-Strike of the PlayStation 2. SOCOM (Full name; SOCOM U.S Navy SEALs) was a military Third-Person Shooter franchise produced by Sony Interactive Entertainment and developed by Zipper Interactive during the Sixth and Seventh Generation of consoles.

These games follow a SEAL team 20 Minutes into the Future (you wouldn't tell, though) consisting of four members (which usually change between, and during, games) combating international terrorism, from your basic Jihadi to a massive international Communist conspiracy to the Albanian Mafia being very naughty.

A large emphasis is on stealth and commands given out to your team (The game used the PS2 headset for voice commands, which, it shares with an obscure game called Operator's Side, a.k.a Lifeline), and have an effect on your post-mission rating. Running-and-gunning, although you can go that way, can get you killed (and infuriating you, since you have to start aaaaaaallll the way pre-mission).

The game had 5 main games and many spin-offs.

The franchise was known for being one of the first military shooter franchises to use actual Special Forces tactics, terms and gear, with the franchise being Backed by the Pentagon for a time. In 2012, developer Zipper Interactive was shut down after the commercial failure of both SOCOM: Confrontation and SOCOM 4 and the franchise was put on franchise limbo with Sony having no interest in bringing the franchise back for the foreseeable future.