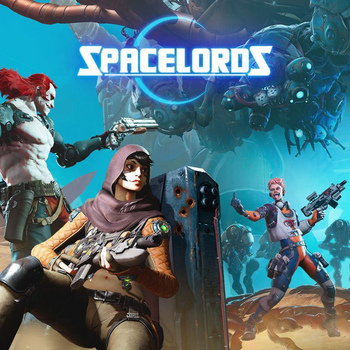 Spacelords (formerly known as Raiders of the Broken Planet) is a Free-to-Play Third-Person Shooter, developed by MercurySteam and launched on September 22nd, 2017 for PC, Xbox One and PS4.

In the far future, humanity has reached a far away planet, cracked and half destroyed. The planet is revealed to be the only source of Aleph,an incredibly powerful substance capable of generating almost unlimited energy, its uses including (but not limited to) spaceship fuel, physical augmentation (to the point of near immortality), planet-busting weapons and powering all sorts of bizarre powers. In the past, the reckless and aggressive use of the Aleph by the local population caused the near destruction of the planet, and thus their subsequent abandonment of their violent ways in favor of a peaceful lifestyle made them easy prey for the human expeditions who reached the planet to seize the Aleph in the hopes of gathering enough power to control the Universe itself.Aside from their constant infighting,the only thing standing between the warmongering human expeditions and their goals is a small group of rebels, sabotaging, rescuing and salvaging whenever possible: the Raiders, a Ragtag Bunch of Misfits led by Harec, a local tribe leader forced to pick up a gun and fight to fend off the invasion.

The game is comprised of a number of missions, divided into campaigns, whith four players pitted against enemies of various factions, each with its quirks and strenghts. Gameplay, while mainly following the conventions of Third Person Shooters with a cover-based system, makes large use of a fluid, brawl-like melee system. A fifth player can drop in, as the Antagonist, whose role is to foil the players's objectives (or kill them all), with the help of the AI-controlled enemies.