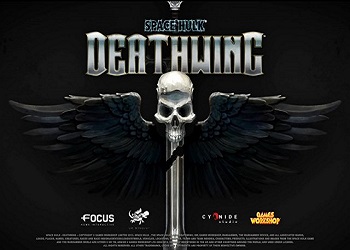 ... And I'm faced with a few complications...
"Heralds of the coming doom, by cry of raven, we are drawn. This oath of war and vengeance, on blade of exalted iron sworn. With blood-anointed swords aloft, advance we into dread's dark shade. Punishment divine unleashed with hate, a wrathful storm of bolt and blade. Purge with plasma, fist and shell, bring cleansing fire's righteous breath. For the Emperor, Knights of Caliban, the Lion's anointed Angels of Death!
Advertisement:
No forgiveness. No retreat."

Space Hulk: Deathwing is a Cooperative Multiplayer First-Person Shooter developed by Streum on Studio, creators of E.Y.E.: Divine Cybermancy (a game heavily influenced by Warhammer itself), with assistance from Cyanide Studio. The game takes place in a Space Hulk infested with Genestealers, and the player a Dark Angels Librarian hailing from the elite 1st company; The Deathwing.

The game was released on December 14 2016 for PC. A PS4 version was released in May 2018 to coincide with the Enhanced Edition update.

You Have Brought Shame Upon Your Chapter