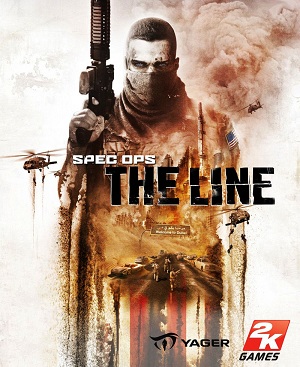 Do you feel like a hero yet?
"This is Colonel John Konrad, United States Army. Attempted evacuation of Dubai ended in... complete... failure. Death toll: too many."
Advertisement:

Spec Ops: The Line is a 2012 cover-based Third-Person Shooter for PC, Xbox 360, PS3 and macOS, created by Yager Development, and the latest game in the Spec Ops series, though it contains no story elements from previous installments.

Dubai is under threat from some of the most violent sandstorms in history. US Army Colonel and founding member of Delta Force John Konrad (Bruce Boxleitner) volunteered his unit, the 33rd Infantry Battalion (a.k.a. the Damned 33rd), to assist in the evacuation of Dubai. Defying orders to withdraw, Konrad attempted to lead a caravan of refugees out of Dubai, just before a massive sandstorm turned the city into a post-apocalyptic wasteland. After six months of silence, the Army fears Konrad and his men were lost in the destruction of the city.

Then a weak distress signal is picked up, and a three-man Delta Force team is sent to find Konrad and rescue survivors, led by Player Character Captain Martin Walker (Nolan North), who previously served under Konrad in Afghanistan.

Except that things are not what they seem, and are about to get worse. Much worse.

On the surface, Spec Ops: The Line appears to be just another generic, dime-a-dozen Call of Duty-like cover shooter, with the player assuming control of a squad of gruff U.S. Delta Force operators who gun down wave after wave of "Persian insurgents" in a Middle Eastern desert setting. However, as the story develops, it slowly reveals itself to actually be a deconstruction of military shooter games, which criticizes the genre for providing players with an unrealistic and immoral Power Fantasy through the glorification of war — and criticizes the player for participating. To summarize: in most ordinary CoD-likes, your character is always a quintessential American hero, the USA (and sometimes the UK) always saves the world, and your enemies are always non-Westerners; in this game to the contrary, your character is ambiguously evil, and it's Americans versus Americans who, in their belief that they're doing the right thing, ultimately ruin everything.

The plot of the game was inspired by Joseph Conrad's Heart of Darkness, the book which also served as the basis of the Francis Ford Coppola film Apocalypse Now.

The following tropes are contained in this game: