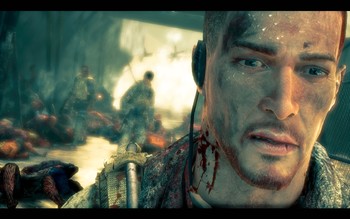 "We were helping."
Soldier: What was it like? How did you survive all this?
Walker: ...Who said I did?
Advertisement:

Spec Ops: The Line makes a point that War. Is. Hell. Communication is important, and that everyone makes mistakes, and in this case, they're some pretty heavy ones. The game makes the effect that war has on its soldiers devastatingly clear and doesn't hesitate for a second in reminding the player whose fault it is.

open/close all folders
Chapter 4
Chapter 8
Advertisement:
Chapter 11
Chapter 12
Chapter 13
Chapter 14
Chapter 15
Advertisement:
Endings
Every chapter in the chapter select has a brief recap of what the events immediately preceding that chapter was... Except the epilogue. Which simply states:

A Farewell to Arms (Suicide)

The Road Back (Surrender)

The Road to Glory (Go Down Fighting)

The Road to Glory (Slaughter)