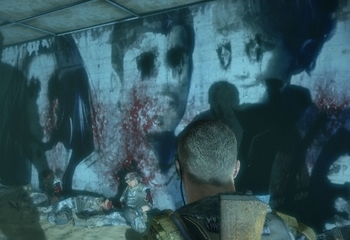 We cannot escape anguish. It is what we are.
Someone has to pay for your crimes, Walker. Who's it going to be?
— Col. John Konrad
Advertisement:

This is War Is Hell: The Game. In fact, fuck it. Let's call this game what it is. It's a horror game wearing a mask of a generic shooter.

Get ready for a lot of Nightmare Fuel.