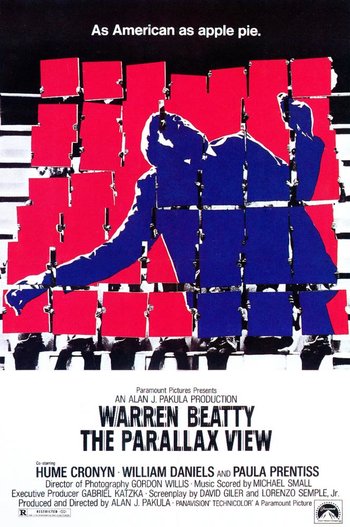 The Parallax View is a 1974 Conspiracy Thriller film, directed by Alan J. Pakula and starring Warren Beatty, Hume Cronyn, William Daniels, and Paula Prentiss, about one reporter's search for the truth regarding a political assassination.

Reporter Joe Frady (Beatty) is one of the many people who witnessed the assassination of U.S. Senator and possible presidential candidate Charles Caroll (William Joyce), shot while campaigning at a restaurant atop Seattle's Space Needle.note It's modeled on RFK's assassination rather than JFK's, but still. Three years later, he is approached by his ex-girlfriend and fellow reporter Lee Carter (Prentiss), who claims to have been one of a few witnesses who saw a second gunman, and tells him that someone is killing these witnesses. In spite of her fears that she's next, Frady brushes her off, only to learn the next day that she has been killed in a car accident. Now suspicious, Frady begins to investigate and discovers the late Caroll was linked to the shady Parallax Corporation, and the danger grows as he infiltrates one of their programs.

Despite its convoluted, unlikely conspiracy plot, this is a great thriller embodying Seventies paranoia in the aftermath of the JFK, RFK, and MLK assassinations, Vietnam, and Watergate. Coincidentally enough, the movie was released at the same time impeachment hearings against President Richard Nixon were underway.