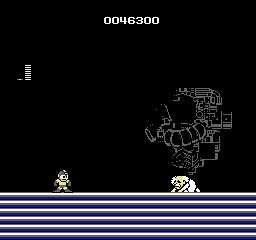 ... and so begins a tradition that will go on 'till the end of time.
Jack the Ripper: M-mercy, honourable knight! Spare me!
Sir Daniel Fortesque: Nuh-uh. [BLAM!]
— Medievil 2
Advertisement:

Sometimes when the heroes defeat the Big Bad, he goes down gracefully. Sometimes he realizes he's doomed and demands you stop fooling around. Sometimes he tries to take the heroes with him. Sometimes the villain is so badass he just stays defiant and won't stop fighting until he's Deader Than Dead. This trope is not about those villains.

Smug Snakes, Dirty Cowards, and bad guys who suffer from Villain Decay rarely go down with their heads held high. For all the bravado and confidence they usually project, they are much more likely to get on their hands and knees and beg for mercy. This also serves to contrast them with the hero, as heroes usually don't beg for mercy from the villain in the opposite situation, at least not for themselves. Very rarely, it's the act of a Noble Demon who is consistent about offering his foes mercy and expects the favour to be returned. Depending on where the hero is on the Sliding Scale of Idealism Versus Cynicism, they might call the villain out on how many people they've denied mercy before sparing them anyway. Others may deliver a "Reason You Suck" Speech and leave the villain alive just to spite him. Or they might just scoff at this and shoot him.

If the hero does grant them mercy, they may perform a Heel–Face Turn out of gratitude. However, it's very common for the villain to attempt to attack the hero one last time, usually while their back is turned. This will rarely work. If the villain doesn't backstab, I Owe You My Life may follow (and because Redemption Equals Death, there's a high chance they'll end up actually giving their life for the hero at some point).

In popular works, such as James Bond and such, where killing the villain is considered standard operating policy, you will rarely, if ever, actually see someone begging for mercy and then be killed by the hero as the resulting Mood Whiplash would be too great and might result in the audience turning against the hero. Of course, there are always Darker and Edgier exceptions, such as with 24 and its licenced-to-kill lead character Jack Bauer. And if the one begging for mercy is a Complete Monster, then audiences can be a bit more forgiving for a hero to deny them that request.

When the hero does this, it is Ain't Too Proud to Beg. Also see Please, I Will Do Anything!. Compare I Surrender, Suckers if the villain uses the surrender to trick the hero. Contrast a version of Embarrassing Rescue where the hero offers or attempts to help the villain of his own volition and the villain refuses, preferring to die rather than accept help from his enemy. If the villain begs to be incarcerated to escape someone rather than begging for his life, it falls under Prefer Jail to the Protagonist.