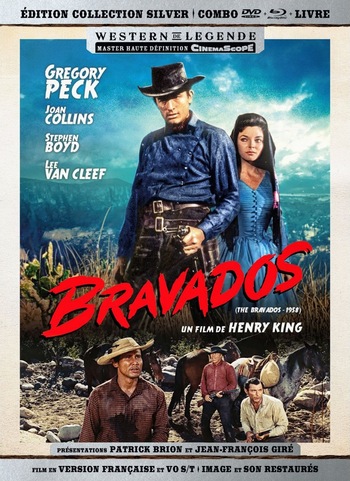 The Bravados is a 1958 American Western noir film directed by Henry King, starring Gregory Peck, Joan Collins, Stephen Boyd and Lee Van Cleef. It is based on a novel of the same name, written by Frank O'Rourke.

Jim Douglass (Peck) has been tracking four men who he believes killed his wife six months ago. He arrives in a small town where he learns the men he's been tracking are set to be hanged. They escape and Douglass leads a posse after the men. They commit further crimes, murdering and raping. Douglass doggedly pursues the men across the desert and into Mexico. Douglass is out for vengeance no matter what the cost and finds them one at a time. He shows each man a picture of his wife and each swears they've never seen her before. Douglass must decide whether to return the men to jail for their court-appointed justice or to take matters into his own hands.