Film / The Bravery of Dora 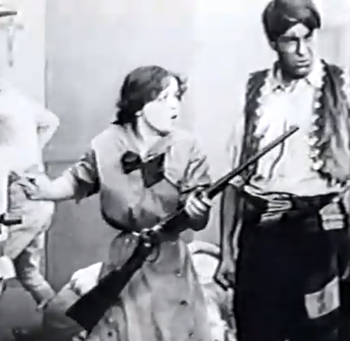 He will not fight his own people... unless, of course, Dora happens to get hurt in the shoot-out she's about to participate in
The Bravery of Dora is a 1912 short Western film.
Advertisement:

The vivacious title character lives on a homestead with her elderly father. One day, they rescue a "halfbreed" named Juan, who falls in love with Dora. Meanwhile, some U.S. soldiers are being pursued by Mexican soldiers, presumably part of a border incident related to the then-ongoing Mexican Revolution. The U.S. soldiers take refuge at the homestead, and a shoot-out with the Mexicans ensues. However, the Mexicans prevail and capture the homestead. Juan is sentenced to die for treason, but the resourceful Dora has a plan to rescue him.

The movie's last scene is lost, resulting in it ending abruptly just when the U.S. army has shown up to save the day.