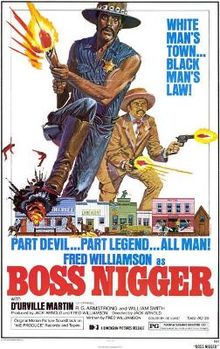 The plot concerns the bounty hunters "Boss" and his Sidekick Amos coming to an entirely white town in the west, and taking up the vacant office of sheriff and deputy. They are ostensibly hunting for the large bounty on the head of the man who's been terrorizing the town, but not before laying down some laws of their own, reversing the double standards deeply ingrained in the racist white community.