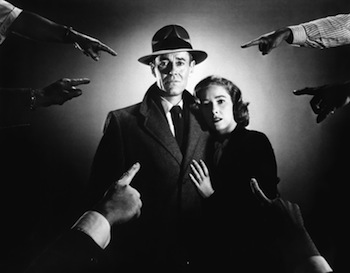 A 1956 docudrama film directed by Alfred Hitchcock and based on an actual legal case from 1953, as covered in the The True Story of Christopher Emmanuel Balestrero by Maxwell Anderson and an article for Time by Herbert Brean.

Christopher Emmanuel "Manny" Balestrero (Henry Fonda) works as a musician in the Stork Club, a then-famous nightclub of New York City (the Stork Club was active from 1929 to 1965). His wife Rose (Vera Miles) needs some dental work and Manny attempts to convince her insurance company to cover the medical expenses. Once he steps into their office, Manny finds himself accused of robbery. He is apparently a look-alike of an armed robber who has visited the office twice already. Several witnesses are willing to testify against him at trial.

His lawyer Frank O'Connor (Anthony Quayle) decides to build the defense by proving that it is based on mistaken identity. Fortunately for the Balestreros, they were away on vacation at the time of the first robbery. Unfortunately for them, people who could testify on that are either dead or hard to locate. Rose slowly descends into depression to the point where she is institutionalized. While Manny is eventually released as the real robber decides to hit another place and is caught in the act, Rose remains in an apathetic state.

Hitchcock used many of the Real Life locations of the story in the film, and even a couple of the actual witnesses.