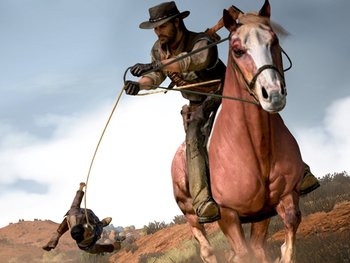 Ted: So how about you and Groovy go and start looking for some clues!
Sonny: Clues to what? What is your trip?
Ted: Clues to why I don't chain you to the back of my van and road-haul you until you're nothing but a pelvis wearing a belt!
— The Venture Bros.: "¡Viva los Muertos!"
Advertisement:

It's not uncommon in fiction for one character to offend or otherwise anger another character (or group). The act of provoking a foul and violent response from someone is a trope as old as fiction itself. But what happens when it's not enough to beat the tar out of someone? Heck, what happens when it's not even enough to just shoot someone dead? Why, you do something that will inflict the pain of having one's skin torn off by fast-moving asphalt while being flung around chaotically, occasionally being thrown, at high speed, into stationary and possibly immovable objects!

When a character is mangled or killed by being tied or attached to something fast moving, like a car, this trope comes into play. The victim is dragged along the ground like a bag of screaming meat. This is a form of Cruel and Unusual Death and Cold-Blooded Torture, to say the least.

Of course, there are versions of this trope that aren't portrayed as quite so extreme. It is possible for a character to be dragged at lower speeds by methods of transportation less powerful than the average automobile. Not that getting a face full of dirt is much fun, either. Often Played for Laughs with Amusing Injuries in cartoons, with nonfatal examples of characters being dragged on a leash or rope across pavement, into trees and lampposts, and through openings much smaller than the victim.

Has nothing to do with dressing in drag.

See Dragged by the Collar for a Lighter and Softer version. Compare Wipe the Floor with You and Body Sled.

A Fatal Case of Road Rash

A-Train gets even with Blue Hawk.

A Fatal Case of Road Rash

A-Train gets even with Blue Hawk.