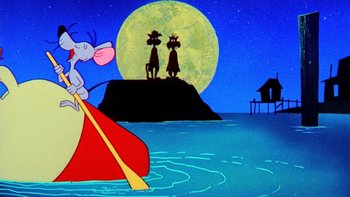 Mouse and Garden is a 1960 Looney Tunes cartoon, directed by Friz Freleng.

It stars Sylvester the cat in one of his appearances without Tweety Bird. In this one Sylvester and another cat named Sam are in a waterfront district, scrounging through garbage cans for food. They are coming up with the usual fish heads and scraps when Sylvester spots a much more appetizing meal: a live mouse. Sylvester tries to eat the mouse without Sam noticing. Sam notices, and tries to steal the mouse without Sylvester noticing. Eventually they give up and declare a truce. They stuff the mouse in a jug, bed down for the night in a shack at the end of the pier, and agree to eat him together in the morning. However, neither of them really mean it.

Sam the cat was voiced by Daws Butler, who is better known for voicing many, many characters for Hanna-Barbera.