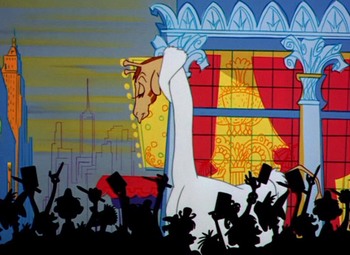 Nelly is a giraffe somewhere in Africa, with a beautiful singing voice that she likes to show off for the local wildlife. She is discovered by a hunter who also happens to be a Broadway agent. Nelly is brought to New York and takes showbiz by storm, becoming a huge singing star. Unfortunately her career is threatened when she falls in love with a male giraffe, one who happens to be married.

Nelly's singing voice was provided by Gloria Wood, a stage singer who sang for many cartoon shorts of the era. Looney Tunes icon Mel Blanc only has a couple of lines, as a random turtle as well as the male giraffe.