Bring the Anchor Along 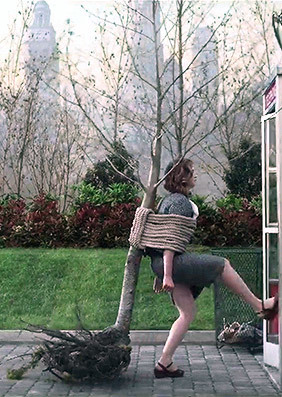 Sometimes the heroes (or the villains) need to restrain someone, but are in a hurry and do not have the time to properly imprison them. A temporary solution is to handcuff (or otherwise shackle them) to a heavy or immovable object, which should ensure that they are still there when the hero returns to retrieve them. But this underestimates the determination of the prisoner, and they turn up later, still handcuffed to the object and dragging it with them (and often looking for revenge). One popular depiction of this is a heavy iron ball tied to the wrists or ankle that the guy drags around.

Compare Chained Heat (when you're chained onto someone else), Steal the Surroundings, Bench Breaker (when you break the anchor).

See also Epic Flail and Chain Pain when this is weaponized. Don't confuse it with Anchors Away (wielding a nautical anchor as a weapon).

99 escapes from her KAOS captors while still tied to a surfboard.

99 escapes from her KAOS captors while still tied to a surfboard.