Theatre / The Play That Goes Wrong 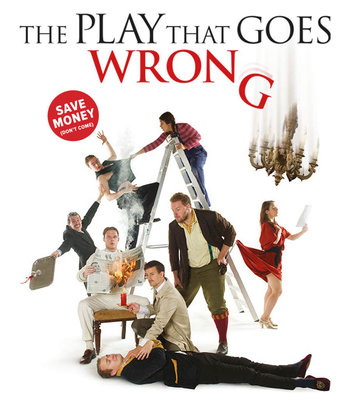 "This set is a bloody death trap!"
—Trevor, after suffering one too many Amusing Injuries
Advertisement:

The Play That Goes Wrong is a play by Henry Lewis, Jonathan Sayer, and Henry Shields. They are all part of the Mischief Theatre Company.

The Cornley Polytechnic Drama Society, riding high on their previous successful play performances (including James and the Peach, The Lion and the Wardrobe, and Cat), has been commissioned to perform The Murder at Haversham Manor, a 1920s murder mystery. However, as production starts, just about everything that can go wrong does. The comedy ranges through slapstick, forgotten and mispronounced lines, the set falling apart, and much more.

It was followed by two sequels, Peter Pan Goes Wrong and A Christmas Carol Goes Wrong, along with a BBC series, The Goes Wrong Show.

The Play That Goes Wrong contains examples of: